There is a lot of talk in the industry about chatbots, specifically about it replacing web and mobile apps. I often find that the consumer market is a good indication of what will make it into the enterprise space.

For instance, Facebook released the messenger platform with chat bot support in April 2016 to their 1.3B daily active users, of which 80M are daily active Facebook Messenger users. Since then, Facebookers have been not only chatting to their friends and family, they've been chatting with bots. Ordering pizza, asking the Game of Thrones bot who is married to Ned Stark, being notified when stocks hit certain limits, or getting help picking the outfit for your next date are becoming normal things to do with chat bots. To be clear, there are no published stats on how many daily active users there are using bots, but this bot market is growing very quickly.

Smart speakers making themselves at home and at work?

The rise of the smart speaker (Amazon Echos, Google Homes, Apple HomePods, and harman/kardon Invoke) is undeniable with the market currently valued at USD 2.68 Billion  and estimates that it will reach USD 11.79 Billion by 2023. Voice commands to turn on lights, set alarms, play music are quickly becoming new norms in family homes. Artificial intelligence (AI) and machine learning (ML) in the cloud is powering this and making plots from movies like Back to the Future II a reality. These assistants are rarely used for anything other than one-way commands, but it has sure taken off. Smart speakers in the workplace add a level of risk, with other colleagues being able to command those assistants and get information such as your calendar or read your emails with no security. Over time, voice identification will help to lock these commands down, but right now these devices are not up to scratch. 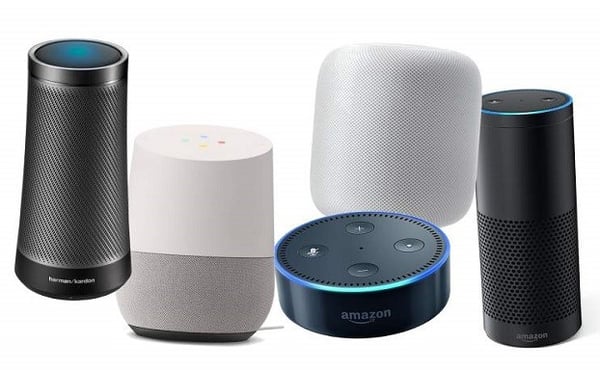 Juniper Research in the U.K. recently predicted that chatbots could save businesses $8 billion annually by 2022, up from $20 million in 2017. That number will only climb as bugs are resolved and chatbots are able to take on more and more customer service tasks that eat up company bandwidth. Each chatbot inquiry saves 4+ minutes of customer service time. For large companies, this is huge.

What are people saying?

There is a lot of buzz around chatbots being the future and will replace web and mobile apps. Some of the explanations you’ll see are:

I don’t see chatbots replacing the need for web and mobile apps. In my experience, there are many that just don’t work with the user experience in chatbots.

Why we still need web and mobile apps

A great example of this is Cortana Calendar.help, a service built by Microsoft Research. The scenario of scheduling a meeting without visibility of everyone’s calendar is tough. The concept of Calendar.help to cc: the email bot and the bot then uses natural language processing to understand the length of meeting and whether it’s in person or online. It then reaches out to everyone on the email thread and tries to work out a time that works for everyone. The reason it uses email over a bot like in Microsoft Teams, highlights one of the restrictions of bots, which is that people outside of your organization may not have the bot and forcing them to add it to do a task is too much friction.

When I’ve trialed this with partners and customers, I’ve had very poor results. Primarily because the email discussion is all text and doesn’t show you your own calendar inline with the meeting time options. The other main issues were that people were not sure how to respond and weren’t confident in the bot processing their reply. It also often took quite a few replies for the bot to work out a time. 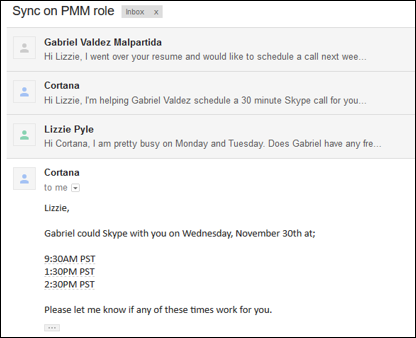 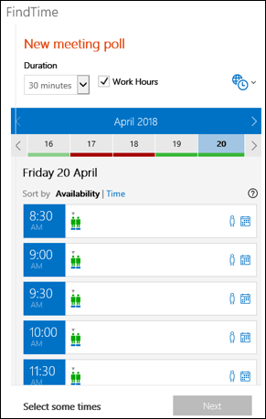 Another team in Microsoft, the FindTime team, took the app approach, where the person creating the meeting picks times based on their availability and the availability of others who have shared their calendar. What’s important here is that FindTime is an app inside of Outlook, right where the user is.

It sends an email with a link to a web page that visually shows the available time slots overlaid with the user’s actual calendar. This makes it so much easier for the user to confidently pick a time based on what other meetings they have.

There are times where bots and apps can complement each other, take telling Alexa with a voice command to “play John Mayer”, but not being able to remember the album name you want to listen to. You’d pull out your phone, do a search in the music app, browse the albums and select “Room full of squares” and push it to your home speaker.

What we’ve learnt with our own Hyperbot 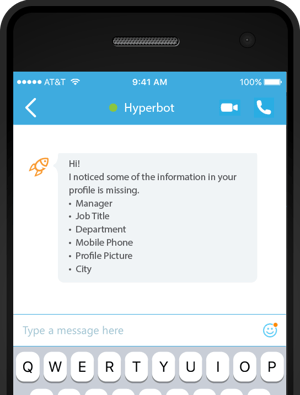 As we’ve mentioned in previous posts on bots, we’ve seen great success with email bots focusing on notifying users when their profile is missing information. We have also found the demand from our customers for a conversational bot as more customers adopt Microsoft Teams. This would allow users to update their profile information via our own chatbot aka Hyperbot.

We’ve been working hard to find the right balance of what makes sense in the conversational bot and what doesn’t. For instance, Microsoft Teams does not support you uploading a photo as part of a conversation with a bot, i.e. for purpose of updating your profile photo. There is also no way of prompting for a response that matches a defined format or defined list of replies, like you can in a form i.e. valid mobile phone format.

What is possible, is having the bot respond and say it’s in the wrong format and use some intelligence to suggest what it could be and ask the user to confirm. But this starts to add bot fatigue and unnecessary chatty conversations that are much faster in a web app. In this scenario, our bot will provide a link to launch the web app rather than go back and forth and frustrate the user.

To relate to this frustration…I can guarantee you’ve been on the phone and pressed option 3 on your phone and then option 4 on your phone and spent another five minutes trying to just talk to someone as the option you need isn’t there.

When the WhoBot was launched in Jan 2018, in my opinion, it demonstrated a chatbot that really showed the power of natural language processing. Primarily because it allows you to query the underlying context of your work life through the Microsoft Graph. Being able to type questions like “who have I messaged about employee engagement?” and the bot responding with people cards is great.

As WhoBot learns different questions, its power will grow exponentially…without overwhelming the user with a complex UX with buttons and options everywhere. The suggested questions let the user know what’s possible and helps guide them through the primary scenarios. The user can also try to discover other commands much like consumers do on Alexa. 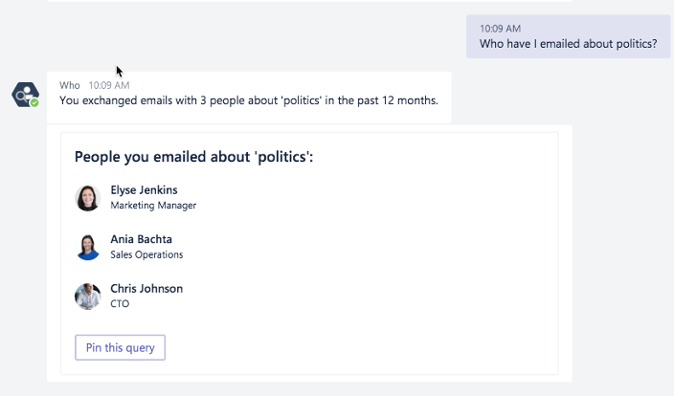 In the next few years, I expect to see many chatbots appear and disappear quickly as it is realized that some scenarios are better left in a more visual experience that can’t be achieved with a bot. The smarter chatbot teams will have to try not to drink the kool-aid and build a bot for bot's sake. Instead they’ll need to understand how it can supplement their existing enterprise business use cases.

Stay tuned for the next installments on enterprise bots. I’ll let you in on the bot scenarios I see being successful in the enterprise.

Want to see Hyperbot in action?

As part of our Hyperfish Lite service, you can automatically collect and manage profile photos in Office 365 via our Hyperbot.