Microsoft Teams new Who bot is available in preview

Today, Microsoft announced in this blog post a bunch of new Microsoft Teams features, the main focus being the Teams UI and App Store. The Who app only made a brief one sentence mention "a new app powered by the Microsoft Graph—which allows you to search for people in your organization by name or topic". I believe it deserves more than this and decided to write this up.

The Who bot was demoed on stage when they announced Microsoft Teams in March 2016. In a press release from Jan 2017, it was stated it would be released at "general availbility of Microsoft Teams".

"Customers have responded positively to Microsoft Teams’ support for intelligent bots. And at General Availability, we’ll deliver WhoBot, which uses natural language processing to help learn about experts in your organization. Powered by LUIS.ai, WhoBot will answer questions like, “Who in our group knows about the Australia sales numbers?” This is just one example of what will be possible with the power of the Microsoft Teams utilizing the Microsoft Graph."

Things went quiet on the conversational bot that you could ask about your colleagues. Asking anyone from Microsoft for updates on this got blank faces. I gave up waiting for an answer in the Technical community, apparently it was "coming soon" in March 2017. It surprises me, because Microsoft are pushing bots and AI heavily in all their positioning and messaging. It would be fascinating to understand what the delay has been on this, especially as a software company in the bot space.

Yesterday morning, I noticed in my Teams client that it was showing up in the ellipsis on the menu bar in the developer preview. This is a v0.2 release, so I would assume this is a preview release not being a v1.0 yet. It is so early in fact, that the web site link on the About tab links to an internal corporate-only SharePoint help site. My guess would be that this bot has been available for Microsoft Employees for a while and that is where its pointing and they haven't quite got it public ready yet.

It is also available in the latest UI update in "More apps" in ellipsis under Productivity too.

Clicking the icon essentially installs the Who app into the ellipsis permenantly for your account. The Microsoft Teams app asks for a variety of persmissions that indicate the direction they are going in with the bot. Having the ability to send messages and notifications to a channel will open up opportunities for Who to interact with real people having discussions and connect people. 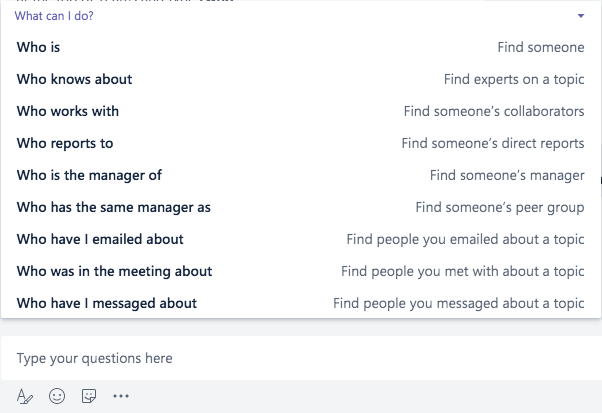 You can ask it a variety of questions by typing in the start of the above phrases.  Most of these questions can be answered by looking directly at a users contact card or the organization chart. The last three questions are a taster of where this bot really differentiates itself.

It will autocomplete the questions rather than having to type them out each time. Unfortunately, it did not let me @ mention people, which is odd as this whole thing revolves around people and you can @ mention in normal conversations in Microsoft Teams. You also have to go to the Who app to ask these questions, the bot is not available currently to @ mention elsewhere.

I purposely typed the first few letters of the name and it did match my colleague which was good. The benefit of discovering information this way is, I don't have to click through ten levels of an organization chart to get the answer.

I tried some queries that I would typically find out using an employee directory. It doesn't look like its quite there yet.

With the newly released Microsoft Teams task bar at the top, you can use "/who Who is Justin?" to quick launch the Who bot too (thanks to AJ for the comment in the blog with this tip!). 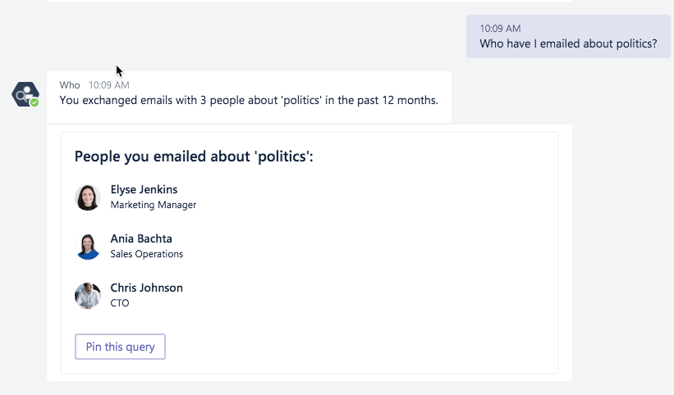 The bot quickly gets more complex and shows off its powers by offering answers for things like "Who have I emailed about politics"? The response came back almost instantly. In my current role, I'd find this super useful when talking about customers. Currently it doesn't show the emails around the topic, just the people, which means jumping out to Outlook. These bot questions can search across meetings, emails, and messages. For messages, it seems to only respond with people inside your organization and not external guests from Microsoft Teams I've created and invited people to our tenant.

The app also has a "Your org" and "Upcoming meetings" tab. The Your org tab  currently is the same as the org charts elsewhere in Microsoft Teams. But the "upcoming meetings" takes a much more people centric view of meetings, by showing who is in each meeting in a visual way. For those that are aware, the People app launched in the App Launcher in Office 365, also has a similar view to this.

I'm personally excited to see what Microsoft does to evolve this bot outside of these basic Who bot scenarios! Since our launch at Hyperfish in September 2016, we have had a bot that focuses on people within Office 365. To find out more, please check out our product videos or get our Hyperfish Lite product that automatically collects and manages profile photos in Office 365 via our own Hyperbot.