The future of Microsoft collaboration is Microsoft Teams

Microsoft Teams was announced in Preview at the beginning of November 2016. Dubbed the chat based workspace for teams, it is an extremely complete preview product. The way I am explaining this to customers is:

Microsoft Teams is the new front end for team collaboration.

In a market where Slack continues to grow, Microsoft certainly is feeling the heat from them. Especially with announcements such as video communications, chat bot support, growing partner ecosystem and their full page ad in the New York Times.

Building on the shoulders of giants

Microsoft already had a number of existing communication services:

Microsoft decided to take the largest user base service, Skype for Business (formerly Lync/Office Communication Server), and take it from a individual/meeting lens to a broader Teams construct.

The primarily engineering teams behind Microsoft Teams is the Skype team, the Active Directory team and the Exchange team. This approach of working together and building on top of existing products, is a refreshing move from Microsoft who have struggled in the past working like this. Steven Sinofsky, ex-Microsoft, does a great job of explaining some of the challenges he witnessed. I too in my tenure at Microsoft also experienced similar things.

What do you get?

The main advantage of it being built on top of Office 365 Groups is that it immediately benefits from key services such as:

Microsoft Teams adds on top of this: 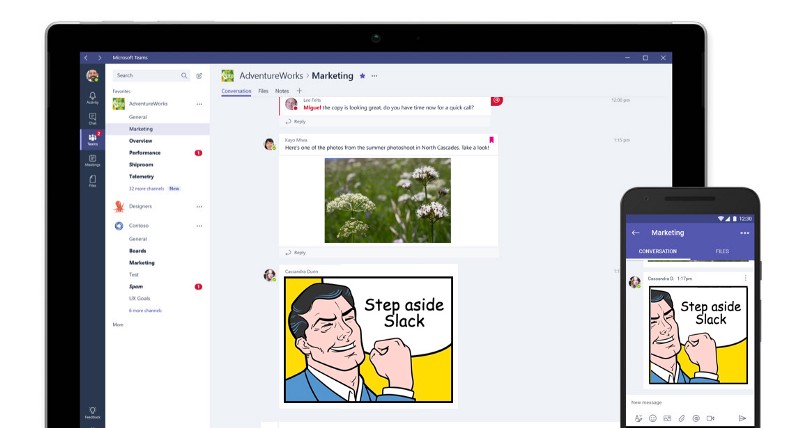 If you are currently using Office 365 Groups in Outlook or SharePoint team sites. The transitional step is to point them to https://teams.microsoft.com/ instead and download the Microsoft Teams app for Windows, macOS, Android, or iOS.

From the Microsoft Teams experience, you’ll get everything that Office 365 Groups has (except Calendar for now) and SharePoint (document libraries for now). In addition, users will no longer require the Skype for Business client to be running as the majority of the functionality is in the Microsoft Teams app.

This will also help user adoption, because users’ won’t get that jarring user interface context jump you get with Office 365 Groups, where clicking on Files, Calendar, Planner, etc. changes the whole page layout for the user or opens new browser windows.

The caveat here is that users will have to be a member of the Team to get the most out of this experience.

Go listen to the Hyperfish Podcast for more info…

Now Microsoft is unlikely to make such a bold statement like those above just yet, and that is for a few reasons:

If you look at the focus on Microsoft Teams and collaboration between Skype, Exchange, and SharePoint/OneDrive engineering teams already, I’d expect to see more engineering teams to get on board in Microsoft. I’m hoping the powers that be(that feel the pressure of Slack), will really force this from the top.

Office 365 Groups support the ability to have external Microsoft Accounts or Office 365 Accounts to be a member. This scenario is in demand for members to collaborate with external contractors or customers who don’t have user accounts inside the organizational directory. Based on comments at the most recent Ignite conference, it won’t be long before Microsoft Teams has this too.

The maximum number of members in a Microsoft Team is currently 600. Office 365 Groups limit is a lot higher than this, so we can assume that Teams will get that shortly.

A huge request on UserVoice for Office 365 Groups was to have a customizable landing page. It was often suggested to use a SharePoint landing page as the landing page for a Group. I suspect this will be side stepped in favor of Microsoft Teams getting this support and it using SharePoint Modern Pages also. This will give a great customization capability with SharePoint Web Parts for both internal developers and ISVs such as Hyperfish. It would also really pave the way for SharePoint Modern Pages to be the user interface framework for Office 365.

Along with Modern Pages, the ability to add a tab for a SharePoint Custom List is enormous. Right now, you can only add a SharePoint Document Library, but I’m sure this isn’t far away. Custom lists are a great way for members to collaborate in a structured way with each list item being a isolated object, rather than unstructured in OneNote or semi-structured in Excel.

Users of Yammer, Groups, Skype, and e-mail all struggle to try and keep on top of communcation. Microsoft Teams does a great job with the Activity Notifications and Recent tabs. I feel this will evolve even further over time and they will learn from what the other communication mediums.

Power Apps and Flow has been focusing hard to integrate with SharePoint as it fills the void left from InfoPath and SharePoint Designer Workflows. Having the ability to kick off a flow based on an activity in Teams or have a Power App embedded into a Team chat is very powerful.

As stated at the Ignite conference, at general availability Microsoft Teams will have Tier C compliance within Office 365. Microsoft will work hard, like it has with other services to bring this up to top compliance. I suspect this will include support for e-discovery and records management like it has done already with Office 365 Groups.

Its an exciting time to be a consumer of Office 365 with all of these tools to help increase the productivity of you as an individual and a contributor to a team!