Microsoft Forms was announced in June 2016 for Office 365 Education customers. It was released due to pressure from Google Apps in the education market with Google Forms. Microsoft knew they couldn’t compete with their current forms products in the market (InfoPath, SharePoint Lists and SharePoint Designer).

It has evolved quickly since its release with embedding directly into OneNote, which is the real differentiator for Microsoft in the education space. The search, theme and a new portal were introduced in April this year. 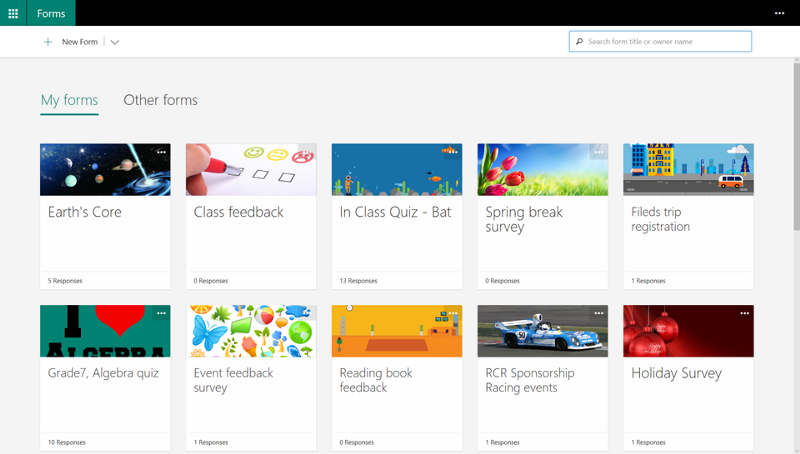 This month, Microsoft announced the availability Microsoft Forms in commercial tenants. It was only a matter of time, because being able to build surveys employees and external users, then report back on the results is critical for most organizations.

At Hyperfish, we have been using TypeForm.com to collect information from customers. I wanted to see how Microsoft Forms stepped up to the plate. Honestly, I wasn’t expecting much from a v1.0 Microsoft service.

I was very surprised to see that the survey I wanted was actually very easy to build and had all the capabilities I required. You only have a choice of enforcing answers to the following formats: choice, text, rating or date picker. The choice settings allow you to have an “other” field that then automatically shows up in the charts too. You can even add additional options after its live and it handles the changes seamlessly in the background.

The preview allows you to see how the form looks in the browser and on a mobile. Having a mobile option is really powerful and necessary to getting users to respond when they are on the go.

Try it out now! 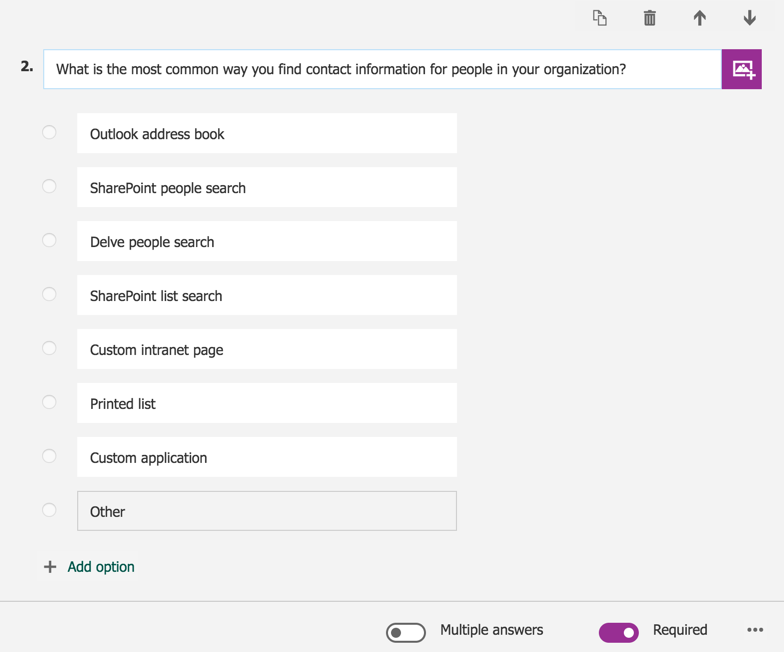 You can try out the form by visiting this link, it will only take 1 minute to fill out. It will treat you as an anonymous user.

If I shared this with our Hyperfish team, it would track them based on their login. There doesn’t seem to be a way to submit results anonymously if the Office 365 user is logged into the browser already. 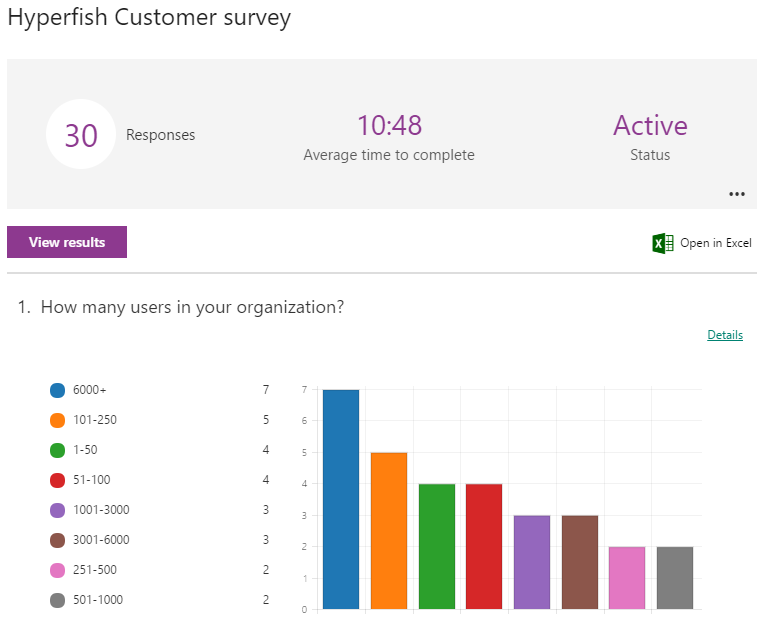 The results page was really impressive and it REAL-TIME updated! You can open the results in Excel and do far more with charting magic.

As well as seeing results in chart form, you can drill down and see how each individual response as well. 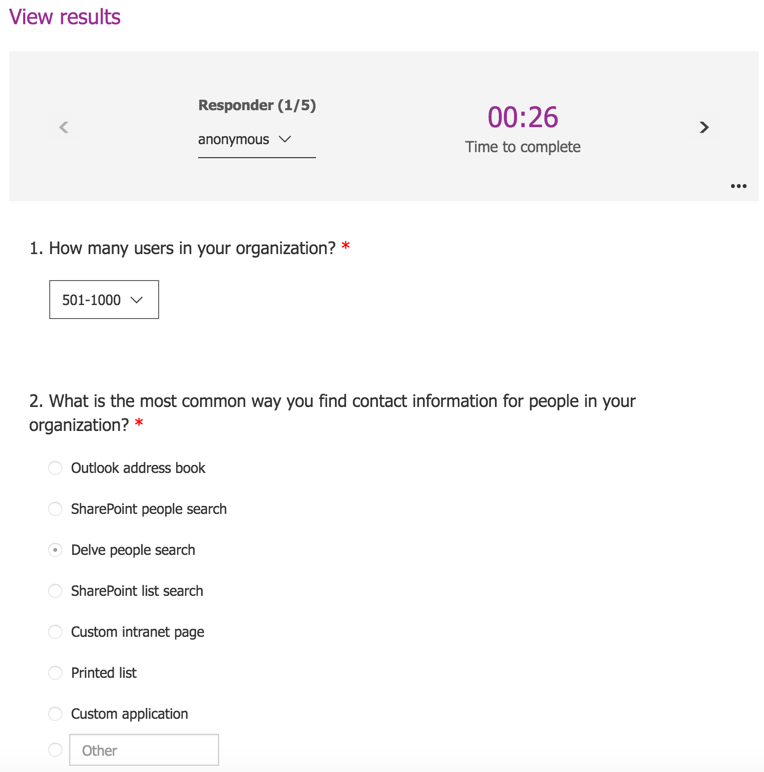 The Microsoft Flow integration is quite limited; right now it can really just be used to send notifications via email, Microsoft Teams, Slack etc.. Unfortunately what it didn’t do was give me the ability to send an email thanking the submitter (here is a User Voice for this). It doesn’t seem to expose the answers as dynamic content either to use as parameters in a Microsoft Flow activity. 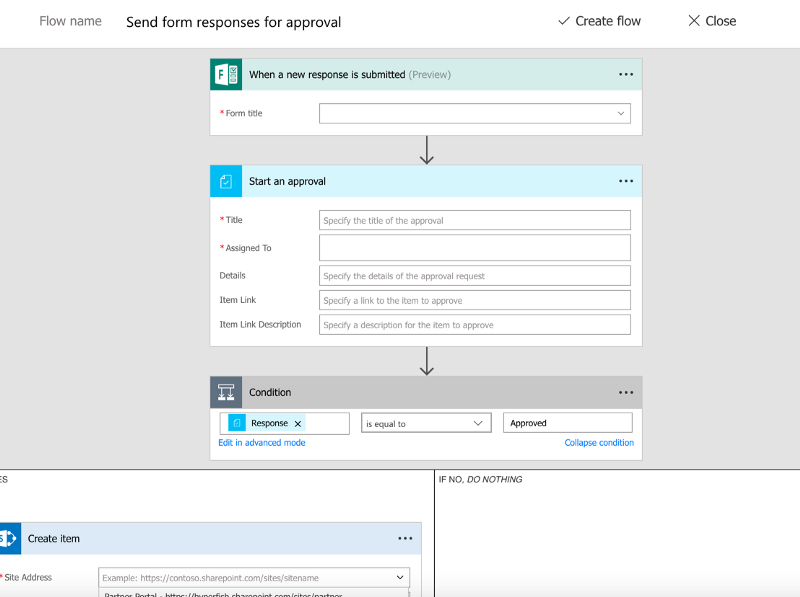 All of the best of breed survey services have much deeper features. As long as you treat this as a basic survey service, then you’ll be fine. Out of the box it doesn’t save the results anywhere, but you can get it out of Excel manually and into other data sources.

The small amount of options for question type can limit you. For instance, the first question in our survey requires a number input. It would have been great to have a text entry that only took whole numbers. Something very common in other platforms.

Sure, there is overlap with Microsoft Power Apps. I envision a lot of Office 365 users building surveys in Power Apps because they don’t discover Microsoft Forms. It surprises me that this product was not just called Microsoft Surveys, but I guess it indicates how much of a threat they felt Google Forms was. That would have made the differentiation a lot simpler.

Why use this in your commercial plans?

At Hyperfish, we will use this a lot externally to collect data, I suspect many organizations to do the same. I envision Microsoft Forms can also be used for many internal scenarios: taking orders for team dinners, voting on the next team event, collecting feedback internally in the organization and much much more! What will your organization use it for?

Overall, I’m very impressed with Microsoft’s answer to a survey service. Standalone survey tools should be worried. To get started, just enable Microsoft Forms in your licensing page in Office 365 admin. Then navigate to https://forms.office.com/

How profile photos enhance communication in the digital workplace

We are visual and social creatures

Companies large and small are focusing their energy on continually ...

At Hyperfish, we are always excited to hear from customers where profile ...