The Fabulous 40 video series, hosted by VP of Product Technology Dan Stoll (@_danstoll) interviews members of the Office 365 & SharePoint community. Dan delivers a rapid fire of 40 questions that let you get to know what drives and inspires the leading minds in Office 365. 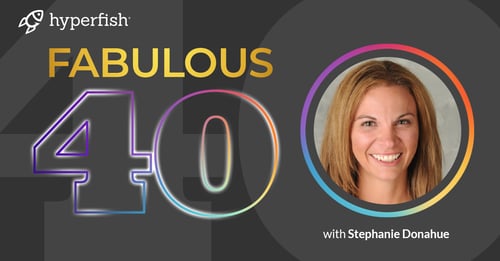 In this inaugural episode Dan catches up with Stephanie Donahue, (@stephkdonahue) Microsoft MVP for Office Apps & Services and President & Co-founder of PAIT Group.

Stephanie caught up with Dan while attending the 2019 Microsoft MVP Summit, and let's him in on the path she took to become an MVP and also discusses the essential tools she uses to manage her growing consultancy. Get more tips from Stephanie

Are you unsure of what to do with all the new tools in Office 365, and trying to figure out which is best for collaboration and communication in your organization?
Check out this free webinar from PAIT group that brings clarity on when to use to use OneDrive, SharePoint, Teams, Yammer and Outlook.

You can also catch Stephanie's expert tips in our Guide to Org Charts in Office 365. The whitepaper explores the different ways you can create and manage organizational charts in Office 365 to help your business and employees get the most from them.