What the LinkedIn acquisition means for your organization’s privacy

In June 2016, Jeff Weiner, CEO of LinkedIn announced the proposed acquisition of LinkedIn by Microsoft. The estimated $26.2B bill took some time to come through, due to getting approval from the US, Canada, Brazil, and the European Union. Along the way there were also concerns raised by Salesforce, Microsoft’s largest CRM competitor, such as the comments from their Chief Legal Officer.

“If Microsoft gains ownership of LinkedIn, the company will have the ability and incentive to use LinkedIn’s one-of-a-kind dataset to enhance its own products, while preventing competitors from accessing and effectively utilizing that same data.” Burke Norton, Chief Legal Officer and Chief of Corporate and Government Affairs, Salesforce

Microsoft’s most recent acquisitions have been hit and miss: Yammer in 2012 for $1.2B, Nokia in 2013 for $7.2B, Skype in 2011 for $8.5B and Mojang (Minecraft) in 2014 for $2.5B.
At $26.2B, this is their largest to date, let’s hope that the cultures of both companies are more inline as their mission statements allude: Microsoft’s “Empower every person and every organization on the planet to achieve more”; and LinkedIn’s “Connect the World’s professionals to make them more productive and successful”. 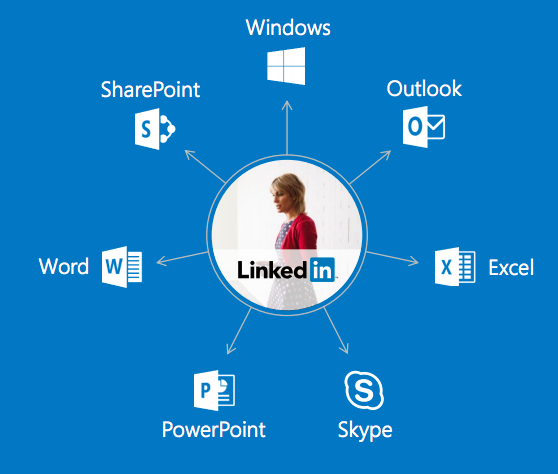 Jeff Weiner highlighted the scale of the acquisition:

“Massively scaling the reach and engagement of LinkedIn by using the network to power the social and identity layers of Microsoft’s ecosystem of over one billion customers.” Jeff Weiner

Active Directory at the center

It has been made clear that LinkedIn will, for now, retain its distinct brand, culture and independence. This was something that didn’t go all that well with the Yammer acquisition (another San Francisco based company). It is also very clear that there are strategic integrations that will happen in the immediate future as part of the shared vision presentation.

Connecting the professional World, from the Shared Vision presentation

Active Directory drives most of Microsoft services listed above. It uses the manager attributes to build the organization charts within Outlook, Delve, Microsoft Teams and more.
Hyperfish has spent a lot of time collecting anonymous data on organizations directory completeness as part of the free analyzer that it provides. 63% of the users scanned by the analyzer do not have the manager field populated and 80% have not uploaded a profile photo. Without key people information like this, the graphs simply won’t work together to their full capacity and give you the richest experience. 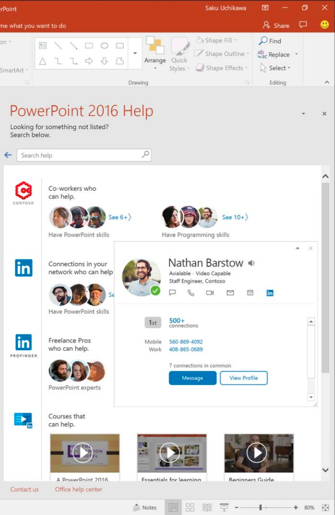 Illustration of integration inside PowerPoint

By joining the graphs together, there are insights that can show up directly in Microsoft experiences. In the PowerPoint illustration on the left hand side, it takes the context of the content of the document and makes recommendations for people with these skills. It is taking advantage of the skills stored not only in Delve within Office 365, but also from endorsements within LinkedIn. I have my own personal concerns with how accurate the endorsements are within LinkedIn, I for one have skills that have been endorsed from people that barely know me. I believe the education and job history will be far more useful in LinkedIn graph for these experiences.
You’ll also note that it is displaying the relevant Lynda.com training content, an acquisition LinkedIn made for ~$1.5B in April 2015. 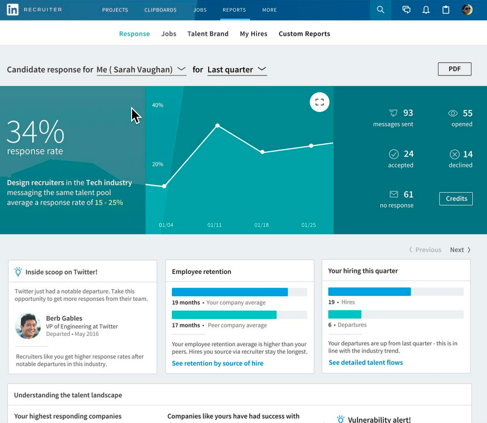 The concerns that Salesforce had about the power of the graphs combining are valid. The power this gives both LinkedIn and Microsoft Dynamics in sharing data across universes is staggering. A scenario in the vision presentation talked to the insights gained for employee retention and hiring statistics. The ability to see where employees came from, where they went afterwards and who they are connected with both inside and outside the organization.

Executive Vice President of the Cloud and Enterprise group in Microsoft, Scott Gutherie’s comments on the potential of joining these graphs really highlights where they want to take this. The goal is to make machine learning and artificial intelligence create sense of all the data in context, whatever experience the user is in.

“The [data] from LinkedIn where you know who knows each other, you know the relationships and you know their skill sets, who they worked with in the past; the insight you get from sales reps’ or customer service reps’ inbox with Exchange and what we have in Office 365, the insight you get in someone’s calendar and even with Skype. If you take all that together and have a cloud that can do deep insight of analytics and machine learning and AI on top of that, you create the ultimate selling tool - the ultimate customer support tool in the industry, because you have so much insight that… no one other vendor can provide.” Scott Guthrie, EVP Microsoft

The concern from many organizations is that right now the data in LinkedIn is owned by the individual. The organization owns all of the data inside the Microsoft systems. The blurred lines now by joining the graphs together is certainly a data privacy issue.
As an example scenario, sales people right now have no idea of the organizational hierarchy of a company without making assumptions about tenure and job titles. If LinkedIn was able to access the relationship between employees within an organization, it would be very easy to find people higher up the chain or badger the boss of the person you’ve been dealing with directly.
The “Recruiter and Sales Navigator” plan from LinkedIn also allows people to access data in LinkedIn without requiring the LinkedIn user to approve a connection. This includes individuals that have set privacy controls in their profile. If the data in a LinkedIn profile was more than just what the user had supplied, e.g. it was coming deep from Microsoft systems, this could also become a concern.
For now, we have to trust that Microsoft and LinkedIn will provide the organizational controls within both graphs at the time of integration. The risk here is that they release capabilities without the correct governance and data privacy controls at launch.

Hyperfish is always looking at the future. We have been working hard planning features for 2017. Our suggestion technology leverages both the Microsoft graph and the LinkedIn graph. As part of the Hyperbot starting dialogs with organizational Users’, we look at information across the graphs. In respect to the Microsoft graph, it will look at their e-mail signatures in Exchange and suggest updates to mobile number, job title, department that typically are more up to date, because the ability to change them is more accessible directly in Outlook. With the LinkedIn graph, it will look at their job title, profile photo and skills and suggest updates, because typically individuals keep this information up to date to stay connected in the industry.

The future is certainly ambitious for Jeff Weiner:

“Realizing LinkedIn’s full potential to truly change the way the world works by partnering with Microsoft to innovate on solutions within the enterprise that are ripest for disruption, e.g., the corporate directory, company news dissemination, collaboration, productivity tools, distribution of business intelligence and employee voice, etc.” Jeff Weiner

The World is changing; Jeff Weiner is trying to help as much as possible. I personally look forward to seeing what they do in the future.

“Whether it’s worker displacement, the skills gap, youth unemployment, or socio-economic stratification, the impact on society will be staggering. I’ve said it on multiple occasions and believe it even more so every day: creating economic opportunity will be the defining issue of our time. That’s why I’m here and why I can’t imagine doing any other job. Simply put, what we do matters, and matters more than ever.” Jeff Weiner

For now, keep your eyes peeled on the progress made in 2017. As integration rolls out, ensure you are aware of the data privacy concerns for your organization and look forward to the benefits in the experience in both systems.

The annual SharePoint and Office 356 survey, conducted by Hyperfish, ...

Most companies, regardless of size, have a formal organizational ...